New Book!
Home | What's Bugging Kitty? | Aggression | Why Your Cats May Not be Getting Along

Why Your Cats May Not be Getting Along

A timid cat might take to hiding under the bed or skulking around the house in order to access resources when the coast is clear. He may even begin to display sickness behaviors from the ongoing stress (such as decreased appetite, elimination out of the litter box, vomiting, diarrhea, etc). A more assertive cat may engage in resource guarding. He might intimidate another cat away from the feeding station, favored sleeping areas, toys or he may lounge in the pathway to the litter box in order to prevent another cat from being able to enter. This behavior could be so subtle that you don’t see it or it could be outright where there’s growling, hissing, body language signals or actual fighting between the cats. The outright aggression is the one cat parents notice but sadly, it’s the conflict that just bubbles under the surface that can go on for years without being addressed.

Tension between your cats can also occur if attention is paid to one cat more than the other or it seems as if one cat is favored. Cats don’t misbehave out of spite but when a cat parent interprets it that way and spanks, yells or squirts water at one cat for a perceived infraction, it doesn’t help the feline relationships. A cat getting intimidated by another cat may have resorted to eliminating outside of the litter box due to fear. If the cat parent yells or punishes the cat for the perceived “misbehavior” it just escalates an already stressful situation for the cat. 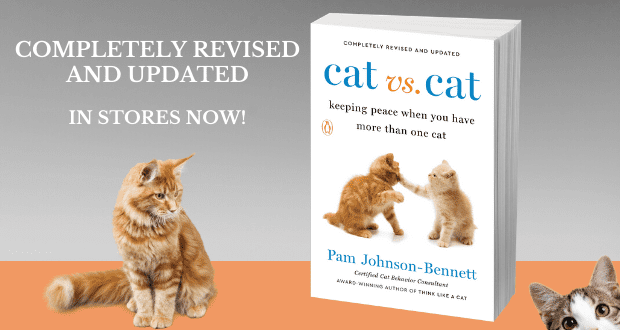 Cat parents want their cats to live as part of a happy family but many times they don’t take into consideration how the cat’s nature plays into the need for resource security. You may want your cats to share one community food bowl in the kitchen or share one big litter box in the laundry room but one or both of those things may be what’s triggering conflict. Much of a cat’s social interaction with other cats has to do with resource availability. Cats live together cooperatively when there are adequate resources for everyone. Competition and conflict occur when there isn’t enough to go around. Even though you’re sure you’ve put enough food in the bowl for both cats, one of the cats may not feel that way. Even though you’ve set up a litter box that’s big enough for two cats, a cat of lower status may not feel comfortable enough entering the territory of the higher ranking cat.

Ensure There’s Enough for Everyone in Your Cat Family

Now that you know how important  resource security is to your cat, you can be more watchful for those subtle signs of tension you may have previously overlooked. The solution, in many cases, is simply to increase the number of resources. Your cats may feel more secure if you increase the number of feeding stations. In some cases that may just involve giving each cat a separate bowl. In other cases you may have to set up feeding stations in multiple locations. When it comes to the litter box, instead of having one toileting area, set up boxes in multiple locations. This way, one cat is never forced to cross another cat’s path. For playtime, unless your cats play cooperatively where each cat equally shares in the game, engage in individual interactive play therapy. If doing group play, have another family member focus on the other cat or if you’re by yourself, hold a fishing pole toy in each hand so no one has to compete. 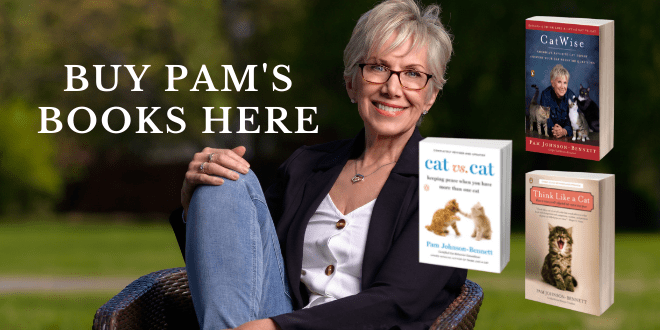 Divide your attention equally among the cats. Even if you’re mad at one cat because you think he’s being a bully or you’re upset at the cat who peed on the carpet, don’t show favorites. Your attention and love are also cherished resources to your cats and they shouldn’t have to compete for those.

The more vertical territory you can create in the home, the better for everyone. A cat of higher status typically prefers to perch in the highest location. A timid cat may also choose an elevated spot for safety and for maximum visual warning time to see approaching opponents. If you don’t have vertical territory, cats may compete for the spot on top of your refrigerator or high atop the bookcase. Provide cat trees, window perches, and if possible, a few cat shelves to increase vertical territory. It’s a great way to increase the size of your feline environment without having to add onto your home. We live in a horizontal world but cats live in a multi-leveled vertical world. Just the addition of some safe cat shelving may lower the tension in your home by a significant amount.

When creating cat shelves, just make sure you create more than one escape route so no one ever feels trapped. Conflict happens when cats feel back in a corner with no way out. When it comes to a potential threat and the fight or flight response, cats would much prefer to get the heck out of there rather than do battle.