A Ball of Yarn Isn’t a Safe Cat Toy 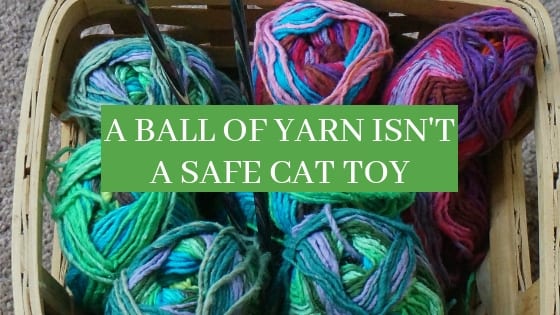 You’ll find pictures of kittens playing with balls of yarn all over the internet, in magazines and in advertisements. It has become an image as classic as kittens lapping at a saucer of milk. It’s very odd though that these two very classic, cute and seemingly harmless activities are actually not healthy.

In previous articles I’ve discussed how milk is not needed by cats once they’re weaned from the mother and that cats actually become lactose intolerant. In today’s article, I want to focus on the dangers of having that cute little kitten playing with a ball of yarn.

It’s Fun, but at What Risk to Your Cat?

You can certainly understand the appeal of a ball of yarn when it comes to kitten playtime. The yarn is light, easy to bat around and many people already have balls of yarn somewhere in their home. What kitten could resist the movement of the ball of yarn as a human family member crochets or knits? It’s easy for new cat guardians to automatically think that the kitten would completely enjoy chasing the ball of yarn as it rolls around the room, unraveling as it goes.

What some new cat guardians may not know though is that the yarn, if swallowed, can become a serious choking hazard. Cats have backward-facing barbs on their tongues. These barbs are what give the cat’s tongue that scratchy texture. The barbs are used to help remove dead hair, dirt and any external parasites from the cat’s coat. For outdoor cats who hunt, the barbs help rasp the meat from the bones of captured prey. As efficient as the barbs are when it comes to certain functions, their positioning make it impossible for the cat to spit anything out that gets caught on the tongue. Because of the way the barbs face, anything that lands on the tongue has only one direction to go… down. It’s easy for yarn or string to get caught on the tongue without the cat parent being aware. The next thing you know, the cat has swallowed it or is trying to swallow it.

Once swallowed, the yarn can end up causing a blockage anywhere from the throat to the intestines. It can pull at the intestines and actually cause a tear.