Never Force Your Cat When Training 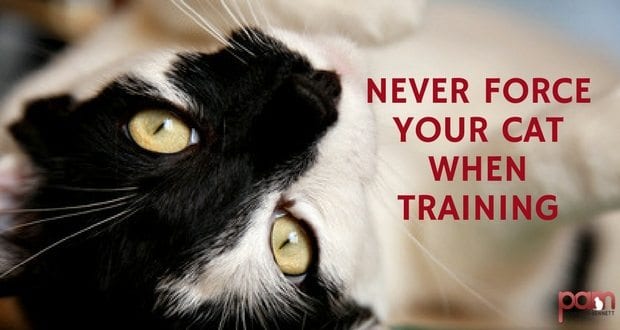 Over the past few months I’ve had a number of new clients contact me for intercat aggression problems due to having followed some very bad advice. They had received advice stating that the way to help a new cat bond with the current resident cats is to brush all the cats with the same brush. Some people were even rubbing the cats with one towel. In other words, they were forcing the cats to have to endure the new cat’s scent. To help everyone better understand how group scent works I even wrote an article about it because clients were asking for accurate information. Still though, the counter-productive information put out there is very disturbing to me because in all aspects of cat behavior the key is to reduce stress – not increase it. When you force a scent on a cat by putting it on his fur, he can’t escape from it. The only way to get rid of it is for the cat to engage in self-grooming behavior. Forcing the scent this way denies the cat the option of having a choice about whether to engage. New cat introductions should be done slowly and positively. I always tell my clients to move at the pace of the most stressed-out cat. The secret is to make the experience positive and to always offer choice. That’s why I use my scented sock technique where I put the scent of the new cat on a clean sock and leave it in the resident cat’s territory. I take the mate to the sock and rub the resident cat in order to leave that scent in the newcomer’s area. This way, the cats can choose how close they want to get to the scents. If a cat advances toward the sock I offer treat rewards. When cats feel they have control over the situation, it keeps a lid on the stress response. In a friendly multicat environment you will find cats engaging in allogrooming but not in a tense situation where there is an unfamiliar cat who has entered the territory. Forcing an unfamiliar cat’s scent on another cat is a recipe for disaster.

Don’t Back Your Cat in a Corner

I prefer the method of “choice” when doing behavior modification because of the ability to control the stress level. Take carrier training for example. If you don’t train your cat to accept going into the carrier, then every time you take the carrier out, the cat will probably run and hide. You will then have to drag him out from under the bed and stuff him in the carrier. This method is stressful for everyone concerned and it often ends up with somebody getting scratched or bitten… and that somebody will most likely be you. Instead, I use the method of desensitizing the cat to the carrier by leaving treats nearby and inside it. I gradually work up to being able to close the door when the cat goes in. With my cat, Pearl, she actually has learned to go into the carrier on verbal cue because she doesn’t connect the carrier with force and fear. I used clicker training with her to help her see the benefits of making one choice over the other.

Be Polite With Your Cat

Even greeting a cat should involve choice. Instead of simply walking up to a cat and immediately stroking him or picking him up, try extending your index finger so he can do a scent identification first. This is a good way to avoid miscommunication. Scent is a very important way cats identify each other so by allowing the cat to sniff your finger, you are offering him the choice of whether to engage or not.

One common area where some cat parents don’t realize that they’re putting a cat in a stressful situation by eliminating choice, is when visitors come to the house. The cat who is scared of a visitor shouldn’t be held by the cat guardian so the visitor can pet him. This is a common mistake I see and although the cat parents may think they’re showing the cat that the visitor is friendly, they’re actually removing the choice of escape and that creates stress. This type of forced behavior modification usually ends up with the cat frantically struggling to get away and possibly injuring the person who is holding him, or the cat completely surrenders in terror while this unfamiliar hand comes toward him. There is a much better behavior modification technique to help a cat become comfortable around visitors and it involves going slowly and rewarding the cat for any baby step in the right direction. All the while, the proper technique allows the cat the choice of whether to engage and at what pace.

Offer Choice to Your Cat Whenever Possible

In all aspects of your cat’s life, think about how you can create a set-up that never makes him feel backed in a corner. Here are just a few examples: