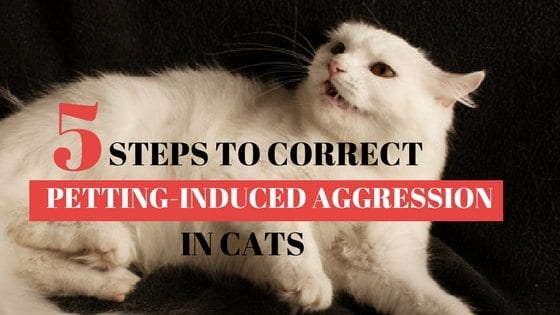 I’m getting more and more calls from cat guardians who are confused about why they’re getting bitten when petting their cats. Things start out just fine and then suddenly, without warning, the cat turns around and lashes out with teeth or claws.

In many cases the behavior being displayed is called petting-induced aggression. It seems to come out of nowhere from the cat parent’s point of view. A quiet session of petting and affection suddenly turns violent as the cat sinks his teeth into the very hand that’s stroking him.

Here are five steps for identifying and correcting petting-induced aggression:

1. Vet Visit for Your Cat

Just to be on the safe side, have your cat examined by the veterinarian because the sudden aggression may be the result of pain. He may be fine when you pet him in some locations on his body but if you hit that tender spot he may react aggressively. Go to the veterinarian to make sure there isn’t an injury you’re unaware of or some unseen condition such as arthritis, tooth problem, abscess, etc.

2. Did You Interpret Your Cat’s Mood Correctly?

Sometimes the reason your cat may bite when you’ve been petting him is that you misinterpreted his intention when he approached in the first place. His approach may actually have been a play solicitation and not a desire to engage in physical affection. Perhaps he was being as tolerant as possible by allowing you to stroke him a few times but if he was in play-mode and not affection-mode then the stroking just served to increase his stimulation.

Even though it may seem as if your cat displayed aggression without any warning, there are usually several body language signals given off that cat parents often ignore. If you’re not paying attention to your cat as you pet him, it may seem as if his attack is out of blue but from his point of view, he clearly gave numerous warnings. If you have a cat who has displayed petting-induced aggression previously then you need to watch his body language as you pet him. You can’t become distracted or you’ll easily miss those physical warning signs again. 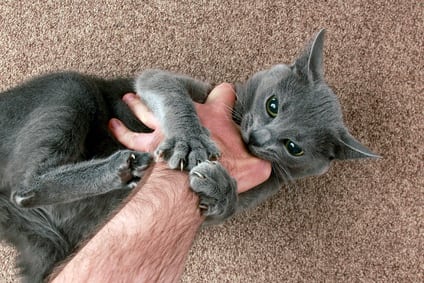 Begin Cat-related Ad-Content
Previous: Does Your Cat have a Litter Aversion?
Next: Do You Have a Disaster Preparedness Plan?