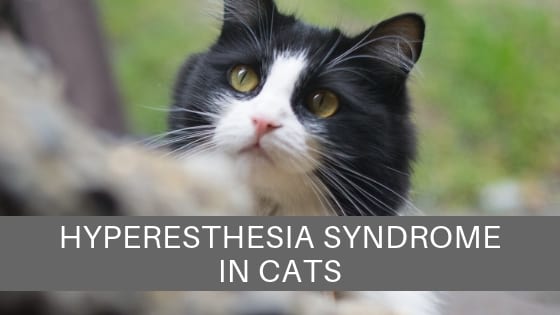 This is also referred to as rolling skin disease. It’s a condition that typically affects younger cats. The cause of hyperesthesia syndrome is unknown but some experts describe it as a neurotransmitter malfunction in the brain during periods of anxiety. It’s not a common disorder but if your cat is experiencing the disorder, it’s a very frightening experience for everyone in the home.

Hyperesthesia causes the cat to feel intensely sensitive to being touched. The parts of the body most vulnerable are the spine and along the tail.

With hyperesthesia you’ll usually notice the cat engages in an excessive amount of self-grooming. Typically, the area the cat focuses on will be the spine and tail. It can sometimes continue to the point of self-mutilation. Other physical signs include tail lashing and skin twitching or rippling. Often, the cat will exhibit sudden bursts of activity and this can escalate into aggressive behavior. The cat may attack other pets in the home or even display aggression toward human family members. The cat may appear perfectly fine and then react aggressively as if a switch has been flipped. The cat even display seizure-like behavior.

In addition to the behaviors mentioned above, other signs may include dilated pupils, biting at the tail and an increase in vocalization.

Begin Cat-related Ad-Content
Previous: Stress in Cats
Next: Why You Should Spay or Neuter Your Cat