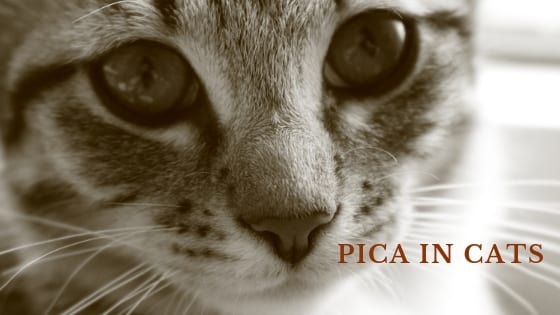 Pica is the term used for the behavior of eating non-food material. The most common material associated with pica is usually wool such as blankets, socks, jackets, etc., but some cats will nibble on just about anything such as paper, plastic grocery bags, litter or shoelaces.

What Causes Pica in Cats?

Pica is considered an obsessive/compulsive-type behavior. There are many possible reasons for pica behavior such as:

Deficiencies in the diet. Some veterinarians and behavior experts believe that inadequate amounts of fat or fiber in the diet can lead a cat to crave these nutrients from non-edible sources. Some cats who are anemic may try to eat litter.

Stress. Cats who are living in a stressful environment may try to self-soothe by engaging in pica behavior.  Changes in the environment such as a move to a new home or the addition of absence of a family member can be stress triggers that can lead to pica.

Boredom or Lack of Attention. A bored cat who is not receiving adequate mental and physical stimulation might begin munching on non-food items just for something to do.

Underlying medical problems. Certain diseases such as diabetes, dental disease or hyperthyroidism or brain disorders may be associated with pica behavior.

Genetics. Pica seems to be more common in  Oriental breeds such as Siamese.

Begin Cat-related Ad-Content
Previous: Moving to a New Home With Your Cat
Next: Are You Misunderstanding Your Cat’s Behavior?