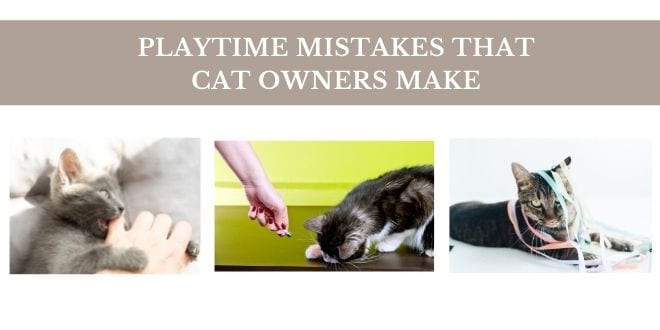 Playtime with your cat may seem like a no-brainer but there are actually a few mistakes you can make that can be counter-productive to your cat’s enjoyment of the game. Some mistakes in your playtime technique can even contribute to behavior problems. That may be surprising to learn but when you think about the technique cats use to hunt (stealth and stalking) and the frantic counter-intuitive way we ask them to play (constant high-speed motion and frustration), it’s very likely that our methods create more negative reactions than positive. Here are some common mistakes I see people make: 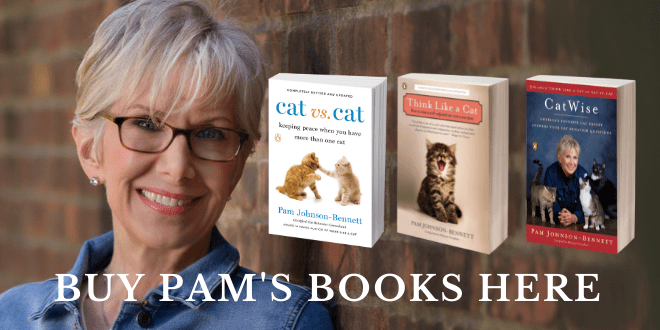 Don’t Use Your Hands as Toys

Wiggling fingers are definitely convenient when your cat is nearby and in play-mode but what actually ends up happening is that you send the unintentional message that biting flesh is acceptable behavior. If the cat learns that biting during play is allowed, she’ll learn that biting is an acceptable and effective form of communication whenever she wants to get a point across. That point could be that she wants attention or maybe wants to be left alone.

The association your cat has with your hands should only be that they are used for gentle petting and holding. If they are also viewed as toys, it can lead to a painful injury should kitty decide to playfully bite another family member other than yourself. That family member could be a child or an elderly relative. Don’t send mixed messages about biting – even when it’s done in play.

This Isn’t a Wrestling Match

Don’t use your hands to pin the cat down or wrestle with her. In addition to the danger of you ending up injured, it changes the tone from play to battle where the cat views you as an opponent. Cats don’t wrestle their prey to the ground and they don’t want to be wrestled to the ground by an adult human. It’s not a fair game at that point. Additionally, if you wrestle your cat and have her on her back, she will then be put in the defensive aggressive posture. You may find yourself not only getting bitten but scratched as well. 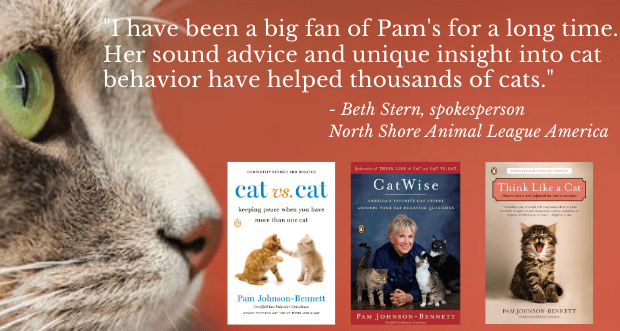 Don’t Prevent Your Cat From Being Successful

Nobody enjoys playing a game if they never get a chance to win. If you wave the toy all over and keep it out of the cat’s reach, it just leads to frustration. Playtime needs to be physically AND mentally rewarding. If your cat chases, pounces, stalks, leaps and attacks the toy but never gets to capture it because you’ve kept it out of her reach, it just becomes a physically exhausting exercise in frustration. This leads me to the topic of laser light toys. Although they’re popular because you can sit in one location and send the laser light all over the room, the cat doesn’t get the mental satisfaction of having actually captured her prey. Even if she manages to get her paw on the light, she’ll realize that there’s nothing under there. Cats have carpal whiskers on their forepaws that let them know when they’re successfully captured prey and whether their capture is moving or not. Capturing a laser toy? A big nothing!

During interactive play sessions your cat needs as much mental satisfaction as physical activity. She needs opportunities for successful captures throughout the game. Think of the toy as prey that gets caught but manages to wiggle away a few times. Toward the game’s end, move the toy slower and eventually allow the cat to have one final grand capture.

I’ve already explained the negatives of laser light toys, but there are other types of toys that aren’t appropriate for cat play. The image of cats playing with balls of yarn is a familiar one to almost everyone but in reality, yarn is a dangerous toy. Cats have backward-facing barbs on their tongues and items such as string, yard or thread can can stuck on the tongue in a way that becomes impossible for kitty to dislodge. Because of the direction of the barbs the only direction the yarn can go is down. This can lead to serious health complications. Even if a cat doesn’t swallow yarn or string, there’s a serious risk of strangulation. 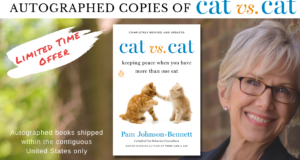 Autographed Copies of Cat vs Cat