Why Do Cats Bury Food? 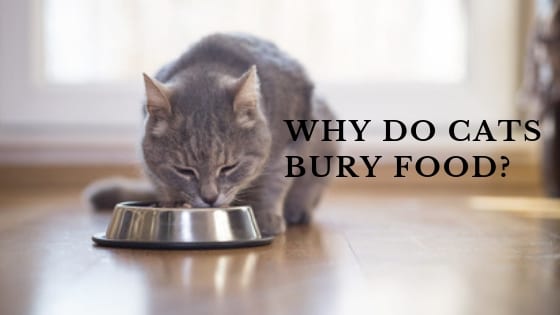 Not all cats do this, but if yours does, the behavior may have been puzzling to you. It’s a relatively common behavior and not one you need to worry about.

The behavior typically looks the same as if the cat is trying to bury waste. You may notice him scraping his front paw on the floor around the bowl. In some cases, cats get so involved in attempting to cover that they actually start pushing the bowl around.

Is Your Cat Sending You a Message?

Many people think that when their cats display this behavior they are saying they dislike the food but this isn’t true. You will see cats performing this covering ritual even with food they have previously eaten and liked.

It All Comes Down to a Cat’s Survival

In the wild, a cat may attempt to bury or cover any uneaten food in order to avoid attracting any predators to the area. It also is an attempt to not alert any other potential prey that a feline hunter is in the vicinity. Cats aren’t scavengers so they don’t bury the food to consume later – it’s strictly for protection purposes. Even an indoor cat who has never set foot outside retains this survival instinct; it’s just a matter of how much it concerns them and that determines to what degree the behavior is displayed.

Begin Cat-related Ad-Content
Previous: How to Trim Your Cat’s Nails
Next: Are Litter Box Liners a Good Idea?