New Book!
Home | Featured Posts | Why You Should Spay or Neuter Your Cat

Why You Should Spay or Neuter Your Cat 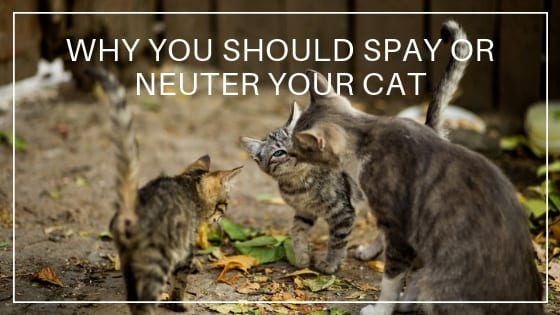 The decision to spay or neuter your cat will be one of the biggest decisions you make regarding your cat’s health and welfare as well as the welfare of other cats. The pet overpopulation problem is devastatingly serious and animals are being put to death every day because shelters simply don’t have the room. Healthy animals are put to death because people don’t act responsibly. According to the ASPCA, seven out of ten cats are put to death simply because there’s no one to adopt them.

Some people may feel as long as they keep their cats indoors there’s no risk to having them remain intact. Pet overpopulation isn’t the only reason to spay or neuter your cat. There are health concerns and behavioral implications as well.

What Happens if You Don’t Neuter Your Male Cat

If you’re under the impression keeping your male cat intact is the kinder choice, you’re dooming your cat to a life of frustration and being at the mercy of hormones. Intact male cats will spray. They will be on a mission to roam, increase their territory, find a mate and fight competitors. If your cat is an indoor kitty then that behavior will be directed at companion cats. The spraying will be directed at your furniture and belongings.

Don’t assume just because your cat lives exclusively indoors he won’t contribute to overpopulation or endure any of the suffering associated with life outdoors as an intact cat. Cats escape from their homes every day. Your cat could easily slip out the door.

If you allow your cat outdoors then you’ll put him at risk of injury or even death as he fights other males while in search of a female in heat. Intact males tend to roam beyond their usual territory to search for females. Your cat may enter into the territory of a rougher and tougher male and the end result of that fight could be tragic.

Cat fights often end with abscesses. A cat’s canine teeth are very sharp and if your cat is bitten, the wound may seal over, leaving bacteria trapped inside. This leads to infection and it’s very painful. With abscesses, it’s often necessary for the veterinarian to leave the wound open with a surgical drain while the infection clears. There is so much suffering involved with cat fights that could easily be avoided by neutering your cat and keeping him indoors.

An unneutered male will mate and the result adds to pet overpopulation. If the female with whom he mates is a stray cat then those kittens will likely also live an outdoor life and grow up intact where they will continue to mate.

Begin Cat-related Ad-Content
Previous: Hyperesthesia Syndrome in Cats
Next: How to Trim Your Cat’s Nails