Hooray!
Home | Family and Home | Communication | Why You Shouldn’t Pet Your Cat’s Belly

Why You Shouldn’t Pet Your Cat’s Belly 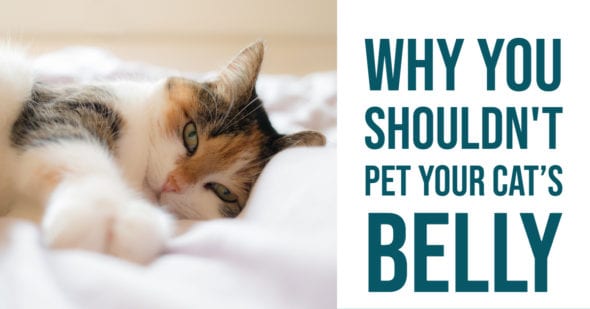 With a dog, a popular position for petting is often the belly rub. To most dogs, nothing feels as enjoyable as when you endlessly scratch and rub that tender tummy. Try that with a cat, however, and you’ll most likely end up with a scratched hand. Why is it that a cat doesn’t enjoy a good belly rub?

A cat is an incredible predator but she’s small enough that she’s also prey. That’s a heck of a lot of pressure on her. As prey, the last thing a cat wants is for a larger predator to have access to her most vulnerable area where vital organs are located. The typical response for a cat who has her stomach touched, is to spring into defensive mode. She may grab your hands with her paws (if you’re unlucky, her claws will also be extended and ready to protect herself) and then maybe even bite. She isn’t being mean to you – it’s a natural protection reflex.

Why a cat would expose her belly depends on the immediate circumstances in which she finds herself. If she’s in a face-off with another cat, rolling over onto her side to expose her belly isn’t a sign of submission, but rather, the ultimate defensive reaction which communicates to the opponent that all weapons (teeth and all claws) will be engaged if a fight is to become physical.

If a cat is stretched out on her back in a sunny spot in a room of your house and looking very peaceful and relaxed, it means she feels very comfortable and not threatened. She’s secure enough in her immediate environment to enjoy the warmth of the sun on her tender tummy. Just don’t ruin that moment by thinking it’s ok to pet her in such a vulnerable spot.

Triggering an Unwanted Response in Your Cat

For many cats, having their bellies rubbed automatically triggers that defensive reaction. Don’t take it personally or think your cat has suddenly taken to viewing you as the enemy. It’s a reflex and your cat is just reacting in a normal way.