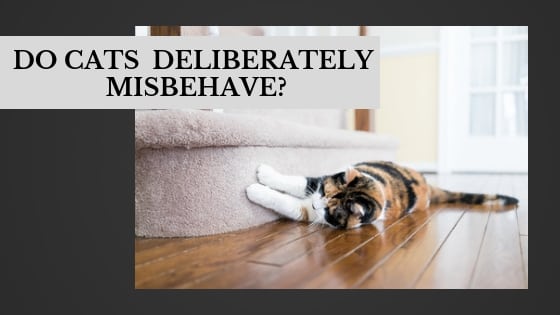 My office receives a large number of requests concerning cat behavior problems and it’s alarming to me whenever I hear people refer to their cats as spiteful or they’re sure a beloved cat’s motivation behind a particular behavior is anger or revenge. Really? Do you really believe your cat is capable of plotting a behavior as punishment for something you have or haven’t done?

There are a couple of major problems with thinking that your cat’s behavior is a punitive plan. First, it fuels miscommunication on your part so you waste valuable time in identifying the true underlying cause of the behavior. If you’re so sure the behavior is motivated by revenge then you will overlook some obvious and critical clues behind the true trigger.

Next, it may create anger on your part so you might end up punishing the cat for the behavior. I’ve received many calls and emails from cat parents who have spanked their cats, rubbed their noses in their messes or put their cats in “time out” as punishment. None of that works. It’s not only counter-productive, but it’s cruel as well.

Begin Cat-related Ad-Content
Previous: Do You Have Too Many Cats?
Next: Cat Myth: Cats are Aloof and Independent