Why Cats Do the Bunny Kick

Even though your cat may not seriously scratch you if she kicks with her hind legs, it’s not a good practice to use your hands as toys and give her the opportunity to scratch or even bite. It sends a mixed message about whether it’s acceptable to bite and scratch skin. 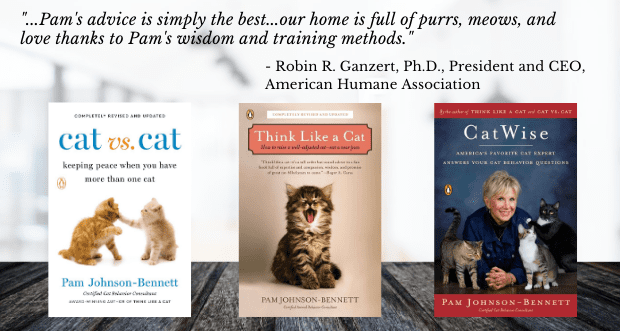 Cat companions may engage in hind leg kicking as they wrestle with each other. You’ll know it’s play and not aggression because they will display inhibited kicking without intending to injure each other. Biting and kicking will not have the level of ferocity that would be seen if the cats were engaged in a true battle. During playtime you shouldn’t hear growling, hissing or screaming. You’ll also see the cats taking turns being the mock aggressor.

The Defensive Bunny Kick by Your Cat

The more serious (and not fun) bunny kick can be displayed, as mentioned above, when you use your hands as toys, but it can also occur when the cat doesn’t want interaction with you. The typical set-up may be that you begin petting her and she rolls onto her back, gets a good grasp of your hand with her front paws and then kicks at your wrist with her hind legs. In many cases, the cat will have given other warnings that she doesn’t want to be petted, issuing a warning nip at your fingers, trying to move away, pawing at you with her front paws or even meowing. Sometimes though, those pre-kick signals don’t occur and the cat just rolls onto her side and begins kicking. Your wrist, especially if you aren’t wearing long sleeves, is a pretty vulnerable spot so even if your cat shows some restraint in her kicking, it’s going to hurt! 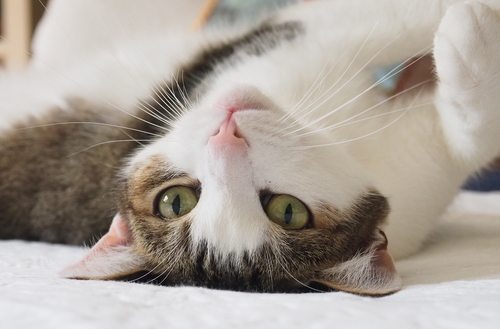 Petting Your Cat’s Stomach Can be a Trigger

A cat may engage in the hind leg bunny kick if you attempt to pet her on the stomach. Your cat may be stretched out on her back and enjoying a nap on a sunny spot of the carpet. It can be hard for a cat parent to resist when you see that soft, furry tummy all exposed. For the most part, many cats don’t like to have their stomachs touched and doing so will trigger an immediate defensive reaction where they will grab your hand and then kick with the hind legs. The bunny kick, when done in a battle situation, is a defensive behavior. When threatened, a cat may roll onto her back to show her opponent that she doesn’t want to do battle but if the fight continues, she will engage all of her deadly weapons which include not just her teeth but the claws on all four feet. When you attempt to pet the exposed stomach of a cat, in many cases, you put her in that defensive position. There are some cat guardians who claim their cats don’t mind, or even seem to enjoy the tummy rub, but I would still advise you to choose safer locations for petting that don’t risk a potential hind leg kick. If your particular cat really does love a good tummy rub, just keep in mind that because one cat likes it doesn’t mean all cats do. Don’t set yourself up for an injury.

Begin Cat-related Ad-Content
Previous: Your Cat’s Tail: What it Says About Her Mood
Next: How to Feed Different Diets in a Multiple Cat Household: Eight Quick Tips