New Book!
Home | What's Bugging Kitty? | Aggression | Cat Fights: What to do When Your Cats Turn on Each Other

Cat Fights: What to do When Your Cats Turn on Each Other It can be very confusing and frustrating when companion cats who have previously lived together in harmony, suddenly decide to engage in a turf war. In some cases, the cats have lived under one roof with an ongoing degree of tension that has now turned to outright hostility and aggression. Cat parents become understandably upset when watching their feline family turn the living room into a battlefield.

I’ve found in my consultations that many cat parents don’t always recognize the fact that their cats aren’t getting along with each other because there are no overt signs of aggression. The cats might not be engaging in an outright battle with fur flying and bloodshed so some people miss the subtle signs of tension. Keep in mind that cats generally prefer to not engage in an actual physical confrontation and that’s why they go to elaborate attempts at posturing. Each cat is hoping that his puffed-up “I’m a really bad dude so don’t mess with me” posture will convince his opponent to back off. There can also be some intimidation going on that’s just under the radar where one cat engages in behavior such as guarding the path to the litter box or nosing another cat out of the food bowl. Not all companion cats are going to get along 100% of the time; just as with people, there are bound to be some misunderstandings and miscommunication, but if you notice a pattern of intimidation, there may be more stress between your cats than you originally thought.

Then there are the cases where there’s no mistaking the fact that your cats don’t get along in any way. Growling, hissing and physical brawls may have become a part of daily life in your household. If this is the case, don’t wait it out with the hope the cats will eventually reach an understanding. This level of aggression will only get worse. It’s time to help them a peaceful understanding.

Find the Cause of the Aggression Between Your Cats

In order to correct the aggression between your cats you have to find out what’s causing it. If the aggression is sudden and uncharacteristic then there could be an underlying medical cause. Any time there’s a change in behavior your cat should be examined by the veterinarian in order to rule out possible medical causes. One cat might be experiencing pain or has developed arthritis and that may be causing the aggression toward the other cat. Visiting your veterinarian is an important step that shouldn’t be skipped.

If the cats had previously gotten along but have suddenly become enemies then redirected aggression may also be a possible cause. One cat may have spotted an unfamiliar animal outside and redirected his aggression toward a companion cat. If one cat visited the veterinarian and then was attacked by his feline companion upon returning home, then that might be territorial/non-recognition aggression. There are many types of aggression and many causes so you need to sharpen your detective skills in order to uncover the trigger.

Make Some Changes to the Cats’ Environment

When the relationship between the cats is tense but doesn’t seem serious or dangerous, then you may be able to begin a behavior program to help them feel more at ease with each other. This involves creating an environment that inspires security as well as doing some behavior work. Just wishing that the cats will get along or punishing them for reacting to each other will do nothing but continue the downward spiral. It’s time to make some changes in the environment and create positive associations. 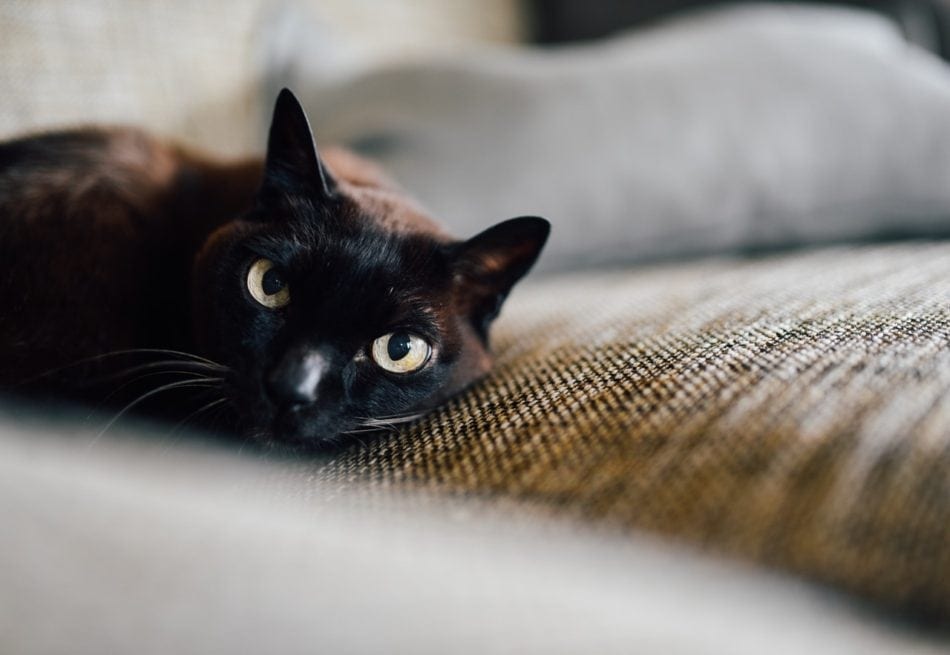 Look at the cats’ living environment and see what you can do to create more safe zones and security. For example, perhaps the cats have been sharing one food bowl and you notice they tend to compete for access. Each cat should have his own food bowl. In some cases, the feeding stations need to be separated as well so the cats don’t see each other. Cats aren’t social eaters so putting them close together during meals can create unnecessary tension.

Another thing to look at is the litter box. Have the cats been sharing one box? The rule of thumb is to have the same number of litter boxes as you have cats plus one extra for good measure. It might be time to place another litter box in the home. Location of the box will matter as well so place that other box in an entirely different room. This way, one cat won’t have to cross the other cat’s path to access the box. In a multicat environment, litter boxes should be located in each cat’s preferred area.

The same rule applies, in my opinion, to scratching posts. Since part of scratching is a marking behavior, don’t ask the cats to share one post if there’s tension between them. Place more than one post in the house. Even though you can’t dedicate a particular post to a certain cat, you are offering them the ability to make the choice to share or not. Place posts in socially significant areas as well as near perimeters (for example, near entry doors). 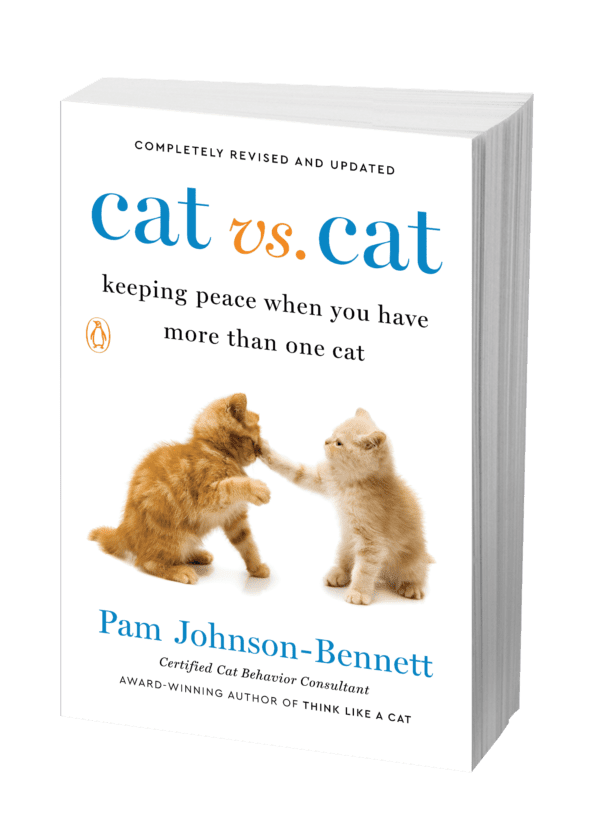 Make sure each cat has a choice when it comes to accessing resources. Offering choice in your environment can go a long way when it comes to keeping stress at bay. This applies to feeding stations, litter boxes, scratching, places to nap, as well as interaction with others.

If you’re at all familiar with my work or have heard any of my conference lectures, you’ve heard me say that we live in a horizontal world but cats live in a vertical one. You have some prime real estate within your home that isn’t being used – real estate that just may make a difference in whether you have a happy cat household or an unhappy one.

You can increase vertical territory in so many ways. If the budget allows you can go over the top and create amazing vertical space or you can do very cost-effective changes. Your cats will appreciate any vertical enhancements as long as they’re safe, secure and comfortable.

Begin Cat-related Ad-Content
Previous: Pam’s “Think Like a Cat” Reintroduction Method
Next: Is Your Cat Stressed Out?